What? Tomatoes have clocks? Despite the fact that it doesn’t have hands, there is indeed a clock within each cell of tomato plants. However surprising this may seem, you can find one in most living beings, including humans! This clock is actually molecular, and usually has a 24 hour rhythm. It is also known under the name of the circadian clock, as circa diem means “nearly a day” in Latin. Just like our familiar mechanical clocks, which give the time in an autonomous fashion, the circadian clock is the guardian of time that enables the synchronisation of internal rhythms, such as the sleep/wake cycle in humans or night/day cycle in plants.

Another phenomenon regulated by the plant clock is leaf oscillation. Leaves actually beat like birds’ wings! But this movement is so slow that it is impossible to see it with the naked eye. This phenomenon is very useful for researchers because it is regular, and so allows them to know how long the circadian clock needs before completing a full cycle. 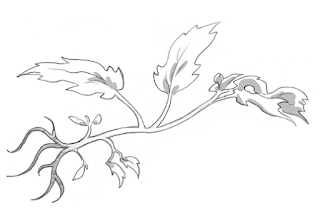 Researchers have compared leaf oscillation within several varieties of cultivated tomatoes (Solanum lycopersicon) and their wild ancestor (Solanum pimpinellifolium). This ancestor produces small fruit with little flesh, and its domestication first started in South America during the pre-Columbian era. Tomatoes were then dispersed throughout the world as the form we are all familiar with. 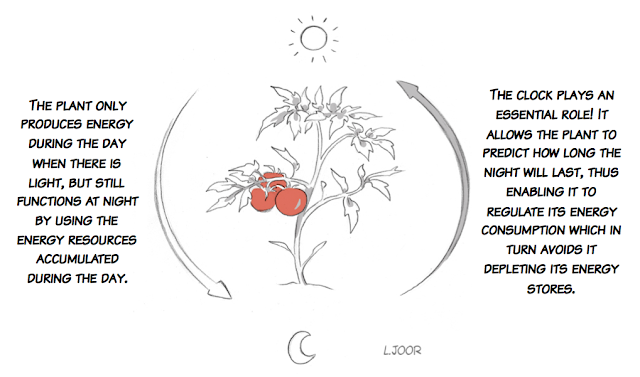 Whereas the wild ancestor’s leaves oscillate with roughly a 24-hour rhythm, those of the cultivated varieties are a lot slower. They go up and down with an average period of 27 hours. After looking at what was going on within the plants, researchers proved that the EID1 gene, which plays a known role in the clock mechanism, underwent change in cultivated tomatoes. It’s like if one of the little cogs of a mechanical clock had been modified, thus affecting the time needed for the clock hands to complete a full turn.

So, without knowing it, humans have selected for tomato varieties with slower clocks. Although we already knew that artificially modifying circadian rhythms in the lab affects plant size and yield, this is the first time that a molecular change was identified in the clock during the process of plant domestication.